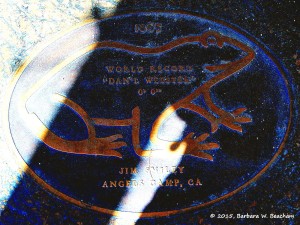 This is my first time writing for Monday’s Finish the Story, and I know we’re supposed to write 100 to 150 word fiction, but I thought – just this once – it might be okay to relate a true story, based on a guy I once met.

When it came to a challenge, Jim Smiley just had to jump right in!

Many years later, Leonidas (Leo) Smiley vowed to avenge great-great-granduncle Jim for a challenge, which the challenger won by cheating, big time. Armed with the kind of knowledge common to folks in stories, he developed FROG 2.0, an addictive free-to-download frog jumping app with lots of in-app impulse purchases. Then, he sought out and convinced the last living descendant of that cheater that FROG 2.0 was “2 Kewl, LOL : ) !!!!!”.

The very next day, Leo checked his bank account, prepared to cackle with glee, knowing he had his revenge. But no, he’d been hacked, his app stolen. That no good family had struck again.

Leo never was able to re-coup his losses from FROG. That’s okay, though, because his next app took off and made him even more money. You’ve probably heard of it. One Eyed Cow Tipping: If At First You Don’t Succeed.

8 thoughts on “FROG 2.0 – in which a 21st century female Mangles the Work of the author formerly known as Samuel Clemens”